This entry is going to be short, as the techniques I am going to show you either require a VPS (or an at home ssh server with a public IP) or an iPhone (iPhone trick not much of a hack, but it works).

Both of the methods were tested recently, December.2015, on a two hour flight.

On my initial flight to visit the family, I connected to the GoGo In-Flight just to play around and see what was going on in the internal network. I knew that I could listen on the network and steal someones MAC address, but I think that is a cheap trick, so I was looking for other ways to bypass.

I did an "ifconfig" found the gateway server, did a full port scan on it (WAY too long to complete) then then reverted to the nmap default top 1000k ports.

Found 53, 443 and 3128 to be up. It looks like they were using Squid Proxy for their gateway with 3128 being used for the http/https traffic. I made some attempts to connect to my VPS on the flight down, but since I didn't have it configured for these ports, I had no luck.

The captain came on and told everyone to put away all electronic devices, so close!

On 53 I was able to make a full TCP connection, but was not able to pass the SSH cert to the VPS (used -vvv to see where SSH was hanging up).

On 3128 I was able to ssh into my VPS port 3128! Jackpot! The proxy was not inspecting traffic on this port. so I ran the following SSH command to create a SOCKS5 Proxy on my machine:

VIOLA! I was able to browse the entire flight for free! 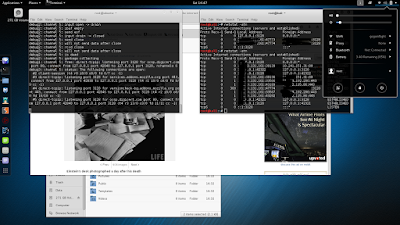 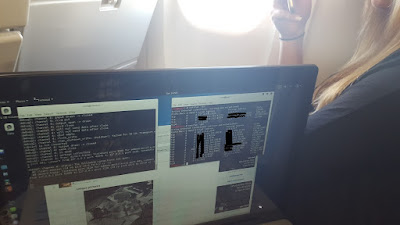 Now I know I mentioned needing an iPhone, while I dont own one, I was able to convince my more ethical friend to try some steps I read in a blog that ended up working also:

1 - Connect to the GoGo Wifi
2 - Browse to the GoGo Movie library (free or paid, it doesnt matter, you wont be paying)
3 - Click on a movie and it will bring you to a page to download the GoGo app
4 - Enter the Captcha Code to access the app.
5 - Submit it
6 - Do not close the browser now! Open a new tab and start browsing the web. If you leave the auth window active, you will retain your authentication cookie! You can browse as much as you'd like now. Once you close out the browser window, you will lose your session.

Enjoy your free wifi!
Posted by s0meguy at 7:10 AM

New comments are not allowed.